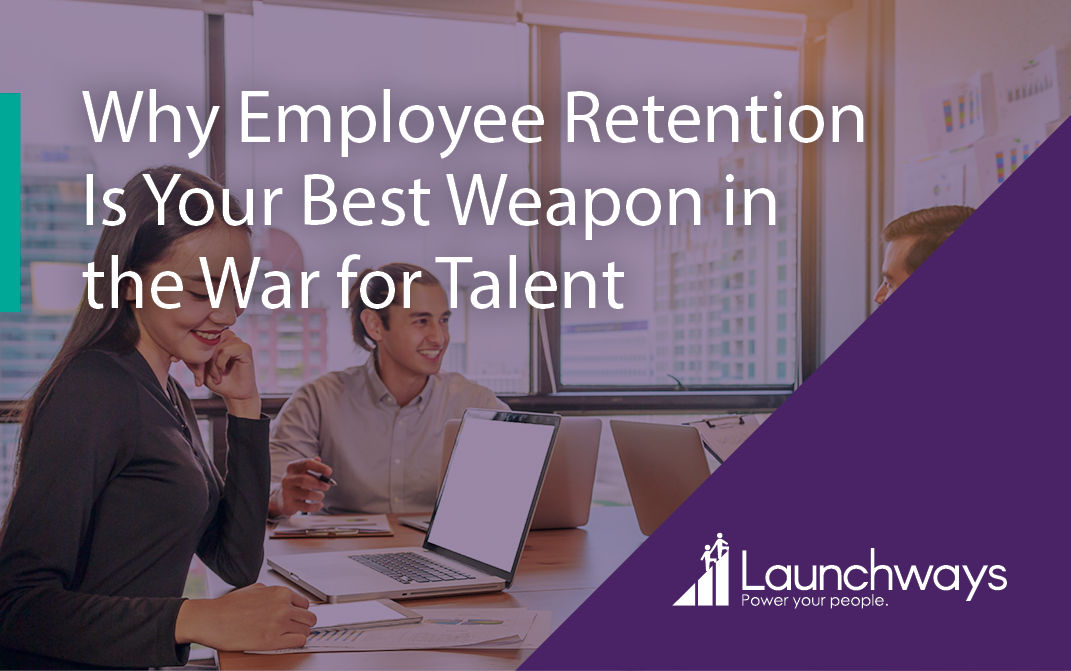 There are many reasons why employee retention is one of the most important considerations for your organization. Among these reasons, which include employee satisfaction and team morale, the biggest reason—or at least the easiest to measure—is cost.

And these costs also include the knowledge and experience that an employee gained while at the company; a loss that will turn into a several month-long learning curve for whoever replaces them.

Other reasons that employee retention should be carefully considered are that the organization’s performance and reputation could suffer with a lot of turnover, and that competition to hang on to top talent is heating up in a country with the lowest unemployment rate in decades.

So how many people are actually leaving their jobs, and why? What are the turnover costs for companies? And what can you do to revamp your retention efforts?

Here’s what you need to know about why employee retention is your best weapon in the war for talent.

A BambooHR onboarding survey, which surveyed over 1,000 U.S. employees, showed that 31% of workers have left a job within the first six months, and 68% of those workers have left within three. And data from the Bureau of Labor Statistics (BLS) shows that since January 2019, every month around 3.5 million employees have left their jobs voluntary. BLS data from 2018 showed workers had been with their current employer for an average of 4.2 years.

The BLS also reported that workers in the baby boom generation were found to hold an average of just under 12 jobs throughout his or her lifetime, between ages 18 and 50. However, nearly half of the 12 jobs were held between ages 18 and 24. This means that younger workers are more likely to shift more often, and so retention strategies should put emphasis on what would appeal to this younger population.

Why do employees leave?

It’s no surprise, really, that modern workers are hard to retain. It’s easier now than it’s ever been to research a new company or refresh a job board each and every day. With the endless resource that is the Internet, workers are learning more about what’s fair and what isn’t, what they could be getting paid versus what they are making.

But, the reason for the two-weeks’ notice has to stem from something specific and not so broad as “I wanted something better.” So what drives employees to leave?

The BambooHR survey mentioned above also reported the top three reasons that surveyed employees left their positions within the first six months:

This feedback shows that an important part of a new job is transparency: if the work was nothing like what was described, employees aren’t going to feel great about that. If they deal with a rude manager, that’s another red flag. And when it’s only been a few months, they may feel less inclined to stick it out—they are less attached or invested in the company at this point than they would be years in.

As SHRM points out, other reasons that employees leave are because they found a better, more competitive alternative (perhaps a company that provides more benefits or higher salaries); they had a “predetermined plan” to quit because of life circumstances, such as going to get a degree or having a family; or they had a frustrating experience that led them to act on impulse. An example of the latter could be that they didn’t receive a promotion or raise when they thought they deserved it.

In addition, a survey from America’s Health Insurance Plan (AHIP) showed that 56% of respondents said health coverage was a key factor in whether or not they stayed at their current job. According to a SHRM survey, 92% of employees said that benefits remain important to their job satisfaction, and that 29% of employees cited their benefits package as one of the top reasons to look for another position within the next year.

The cost of turnover

The average cost per hire is over $4,000, according to a study from the SHRM, and it takes 42 days on average to fill a given position. Whether or not that number would be much higher or lower for your company, there’s no arguing that costs are substantial. In addition to these financial setbacks, there’s no one in the role doing the work, putting strain on your other employees.

Also keep in mind that those covering the work while a position is being filled may expect to be compensated for the extra work, adding to the costs even more. So needless to say, turnover is not only frustrating, reputation-hurting, and time-consuming, it’s also expensive.

How to revamp your employee retention strategy

To win the war for talent that’s currently going on in the U.S., it’s time to revamp your retention strategy. Based on the common reasons people leave their jobs above, consider these methods:

As already mentioned, it can be upsetting or surprising to a new hire if the duties discussed in the interview were not accurate to the job they suddenly find themselves in. This is why it’s not always enough for an HR rep to do the interview and why a manager or colleague who will have similar duties should be engaged in the candidate-seeking process.

Because workers hold health and other benefits as a top priority in their decision to stay at their jobs, 85% of HR professionals say that they use benefits as a strategic tool to positively impact recruitment and retention, according to an SHRM benefits survey. For example, new trends include updates to parental benefits, such as maternity and paternity leave and adoption leave.

But another part of updating your employee benefits is about work-life balance. Modern employees look for jobs with flexibility offerings, such as working from home or different working hours. These considerations are especially important when catering to the younger generations, who value workplace culture and flexibility.

According to the Deloitte Global Millennial Survey 2019, half of millennials surveyed said that they would consider working in the gig economy. This lifestyle appealed to them because of the chance to earn more money (58%), to work their own hours (41%) or to achieve better work/life balance (37%).

3. Encourage position transfers within the company

Another smart move to better retain and satisfy employees is to discuss their end goals and their satisfaction in their current roles, and encourage them to look into other departments if they’re not happy. Some companies are implementing this idea into their policies and procedures, so employees can easily look at their handbook and find out if this is an option.

4. Talk about pay equality and diversity

Pay equality and diversity are two hot topics in today’s workplace culture. Young employees want to know that they’re being compensated for their hard work and dedication, and it will be easy for them to tell if decisions like wage range is based on discriminatory factors.

If this hasn’t been a focus yet for your company, start by offering trainings or seminars where employees can learn or share. Express your commitment to these issues so that employees know you’re thinking about it.

Another tried-and-true way to get inside the heads of your employees is to simply ask them. Don’t try to guess how happy they are or how satisfied they are with their work or department. Implement employee surveys that are anonymous so they feel comfortable sharing. Hold discussions where employees can provide their opinions, thoughts, and feelings about the company and what could be improved.

It also can’t hurt to introduce new perks in the office, like a Friday lunchtime game or regular outings after work. These opportunities for interaction can help leaders become aware of issues or successes.

Retention is key with the current dips in the unemployment rate, which are only getting lower. You need to create a retention plan that addresses real concerns that your employees are having.

These strategies will help you to stand out from competitors and retain quality talent. Make sure you give these considerations due care, and your overall workplace environment will improve (not to mention you’ll save on the high costs of filling positions that experience turnover regularly).

Don’t miss our upcoming webinar “How to Win the War For Talent“.

FREE GIFT: receive our most popular eBook on Company Culture when you subscribe.